The New Volvo XC90 wins the Car of the Year competition 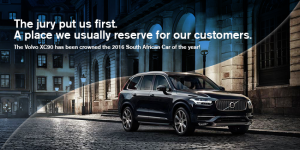 We are proud to announce that the New Volvo XC90 has won the prestigious 2016 WesBank / South African Guild of Motoring Journalists Car of the Year award!

The battle for the 2016 Car of the Year saw 12 of the top vehicles in South Africa, voted by the South African Guild of Motoring Journalists (SAGMJ), compete for the coveted title in Johannesburg.

It came down to the wire for the 12 finalists. For the first time in the competition, the first and second runner-up was revealed. Each of the 12 contenders were put through stringent testing by 27 jury members during a two-day evaluation process earlier in February 2016 at the Gerotek test facility just outside Pretoria.
The winner was revealed!

Volvo South Africa managing director, Greg Maruszewski, said: “We are absolutely delighted with our victory. With the all-new XC90 we are not only re-writing the rules of a post-modern luxury driving experience but reinventing our brand as well.”

VISIT VOLVO CARS GABORONE AND TEST DRIVE OUR CAR OF THE YEAR!

For further information or to book a test drive contact us on: