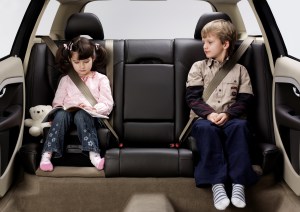 Volvo Car Group’s (Volvo Cars) dedication to protecting the smallest and most vulnerable car occupants celebrates its 50-year anniversary in 2014. Volvo’s ground-breaking child safety work started when the company developed the world’s first rear-facing child seat prototype in a PV544 in 1964 – and the latest innovation is an Inflatable Child Seat Concept that is easily tucked away in a small bag when not in use.

The differences in anatomy between children and adults form the foundation for Volvo Cars’ child safety developments both in terms of integrated car features as well as accessories. Children are not small versions of adults, which is why children need special restraints when travelling in cars.

“The basic principle remains the same as fifty years ago. The smallest children must always travel facing the rear until the age of three to four. Older children should use a booster cushion or booster seat that ensures the lap belt is correctly fitted over the pelvis,” says Professor Lotta Jakobsson, Senior Technical Specialist at Volvo Cars Safety Centre.

Below are some of the most important milestones in Volvo Cars’ child safety history:

Inspired by how astronauts travel rearwards, Bertil Aldman, medical doctor and subsequently Professor in Traffic Safety at Chalmers University of Technology, developed the very first child seat prototype. Volvo was closely involved in the development and the testing was carried out in a Volvo PV544.

The first child seat to be sold to customers was created by turning the front passenger seat around. Adding a padded backrest with straps made sure that the rearward-facing child was kept in place. The solution was sold as an accessory for the recently introduced Volvo Amazon.

Rearward-facing child seats are designed to support the neck and help spread the force of a frontal impact over a larger area. Frontal impacts are the most frequent and usually the most severe impact situation.

Children from three to four years and up travel facing forwards using the standard safety belt with a belt-positioning booster cushion. Volvo Cars’ policy is that children should use a booster cushion until they are 140 centimetres tall and ten years old. When using a booster cushion, the child runs an approximately 75 per cent lower risk of being injured than compared to being unrestrained.

The world-first solution for the standardised, car-integrated ISOFIX fittings was actually two rearward-facing seats in one. Both seats – one for infants and one for toddlers up to four years of age – could be fitted in the same ISOFIX frame.

The innovation, which is still in the development stage, is easy to install and can be tucked away in a small bag when not in use. This means that the child seat can be easily transferred between cars and the bag even fits in carry-on luggage when flying or travelling.